I really enjoyed Jessica Jones’ talk last month. Like quite a few parents, my portrait photography really developed when my daughter arrived, as I had a captive subject, or maybe that was a captive photographer, as you can’t get out that much with small children. My daughter makes double figures this year, and is showing a mild interest in photography as well as often being quite cooperative as a model. Still, family time is a priority, which is why I don’t often get to club events other than club night. I’m a bit envious of those of you who are going to Rotoiti, but I did manage to get out for a bit of a photographic adventure myself recently which was probably a bit rugged to be a club field trip.

Recently, I did manage to escape overnight with another dad who was suffering wilderness withdrawal symptoms and we disappeared off into the back country for 24 hours. My friend isn’t a photographer. He shoots things, but with guns, although in this case it was more of a reconnaissance mission to find out if there was anything to shoot. I did take an assortment of camera equipment though, including my Pentax DSLR along with a wide angle 10-20mm zoom, a general purpose 28-105mm zoom, a 100mm macro lens, and a 70-200mm medium telephoto zoom, and of course a tripod. My camera, the macro lens, and the 28-105 are fully weather sealed, which is something I appreciate when going bush. I also took a camcorder and my smartphone. My Carrying all that in addition to food, a gas stove, a sleeping bag, and clothing for all weather conditions for nearly nine kilometres each way was fairly heavy, but it was worth it as I saw more species of fungi in 24 hours than I’ve seen in my life before. Sometimes the most valuable equipment for photography is your own two legs to get you to interesting subjects. You can read all about my adventure and see a few photos I took over on my own website here.

Later on in the year, there’s a phones/tablets monthly theme, and I know Liz Davidson is going to give a talk from her perspective about phone photography, but I thought I might mention it from the perspective of primarily a DSLR user, with an interest in landscape and natural history.

Smartphone cameras are cameras. Like any camera, they are capable of capturing images, and depending on what sort of images and what intent you have for them, they can be just as appropriate as a much larger DSLR. In some cases they’re not though, and as with any camera, it’s important to know the limitations of your gear.

Take a look at the following two images. Can you pick which is the DSLR image and which is the smartphone image? Maybe. Maybe not. 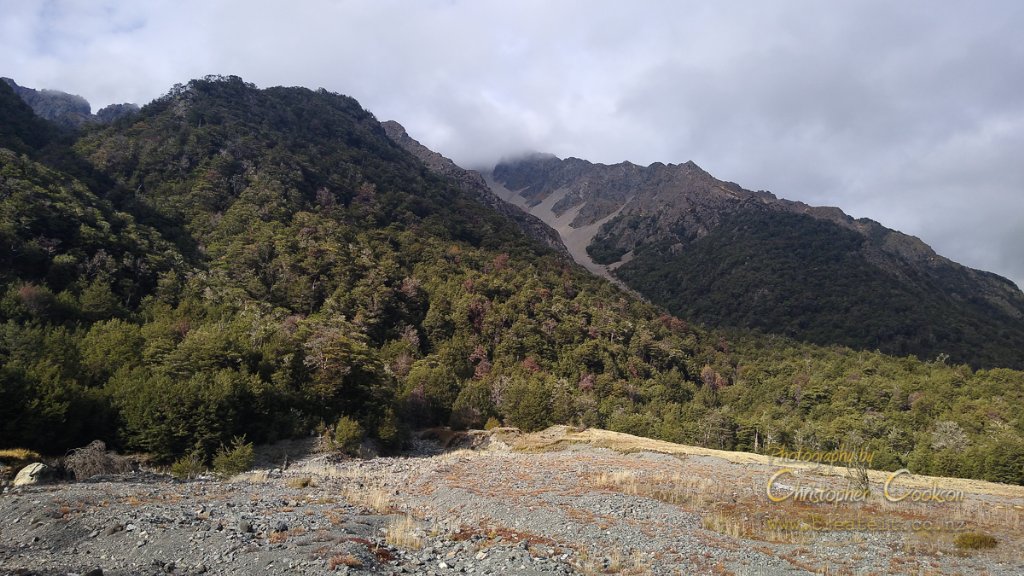 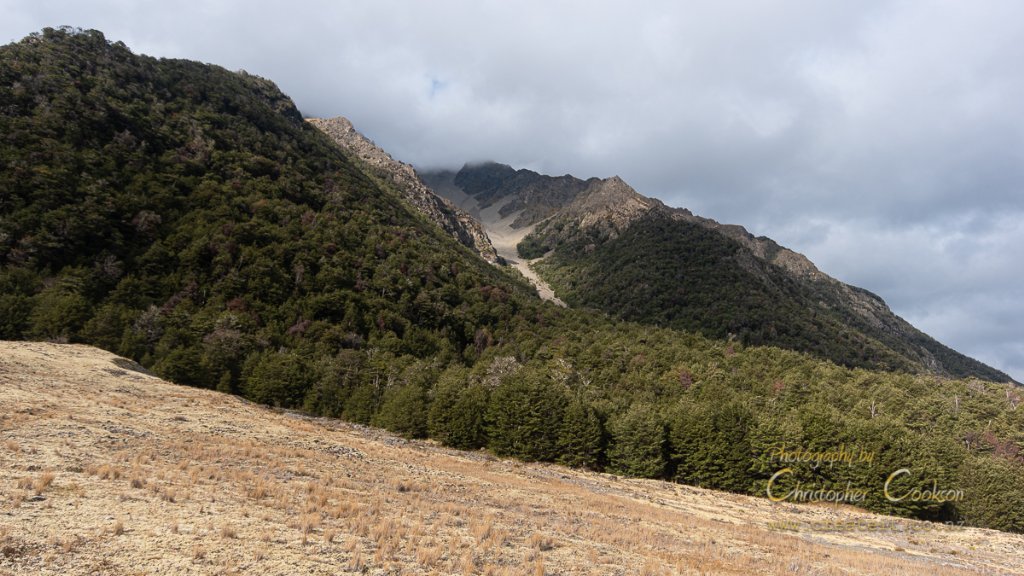 In good lighting, and not enlarged too much, even with a modest smartphone, the images can be pretty good. Sure, you don’t have a physical zoom, but if you don’t might walking, you can move to compose your image. Many great historic images have been shot on film cameras with fixed focal length lenses, so while the lack of a zoom may be inconvenient at times, it doesn’t prevent a camera from making great images.

Change the lighting situation though, and things can end up quite different. Smartphones have tiny sensors, whereas DSLRs have considerably larger ones, with full frame DSLRs having sensors the same size as 35mm film negatives, and cheaper APS-C cameras having smaller sensors, but still much bigger than a smartphone. If you think of a sensor as being like a bucket, or a cup, or a thimble, and light like rain, then if it’s pouring with rain, then it doesn’t matter what size container you try to catch it with, you’re going to capture some rain. If it’s only drizzling though, and you’ve only got a thimble, there’s less chance you’ll actually catch any rain in a given period of time than someone trying to catch it with a swimming pool, because rain falls randomly, and the bigger the surface area, the more likely you are to catch some.

Light works the same way, which is why tiny sensors tend not to work so well when there isn’t a lot of light around. My smartphone, that captures images that look pretty much as good on screen as my DSLR images, when taken in a well lit environment, have a tendency to look grainy and blurry when there’s not much light about. It doesn’t help that I don’t have a tripod for my smartphone, as hand holding any camera in low light isn’t a recipe for success.

Another deficiency I’ve noticed with my smartphone, which is not unique to smartphones, but can affect any lens more or less, is that when using the smartphone for macro photography, the edges of an image are noticeably blurred, even when they’re at a distance that’s in focus. DSLR lenses can create images with soft edges too, but if a lens isn’t giving you the result you want you can always change it, but not with a smartphone.

A lot of smartphones now support RAW capture to try to extract more data out of images than jpg files, but good luck with trying to get software support for it, unless you’ve got a leading model phone. I tried opening some DNG files from my phone in both Lightroom and PhotoLab and in both cases they were awful, in fact worse than jpgs, and no amount of fiddling with them could fix them, whereas DNG files from my DSLR contain a huge amount of detail.

One phone feature I find indispensable is the geotagging of photos. If I have the GPS turned on, then any photos I take have GPS data embedded in them so that when I import them into Lightroom, the map module in Lightroom shows me exactly where I took them. If I’m careful to keep the clock in my DSLR and my phone synchronised, and organise my photos by date, then my DSLR images should appear near phone images of the same location in the filmstrip at the bottom of Lightroom, so that I can drag a DSLR image onto the correct location on the map. This is particularly useful if you’re wanting help with identification of natural history subjects, as experts are more likely to be able to help if they know where you photographed an organism. 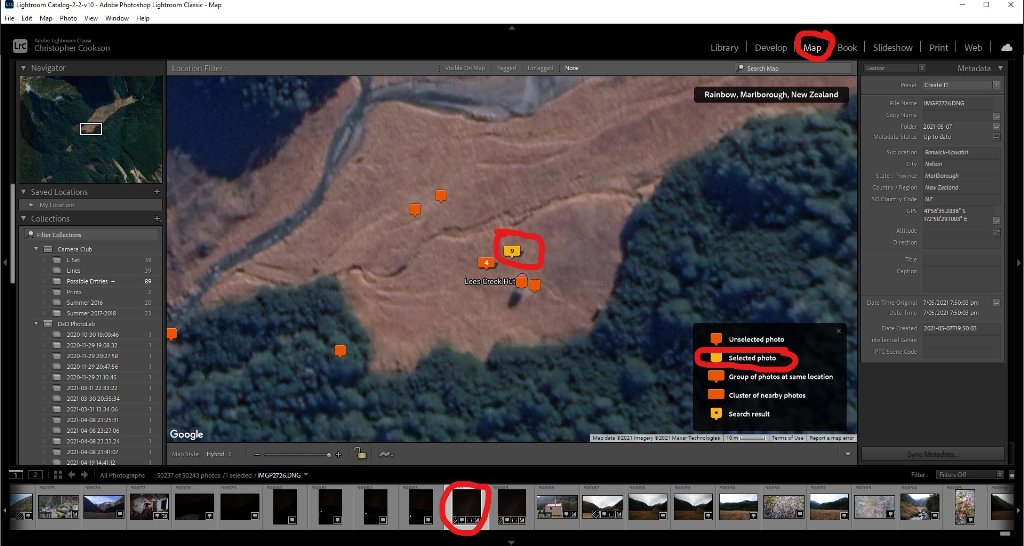 In my case, my phone camera is a secondary photographic tool to my DSLR most of the time, so I’ll be looking forward to hearing Liz Davidson’s talk about her phone photography later in the year, as I understand she uses her phone more than her DSLR.